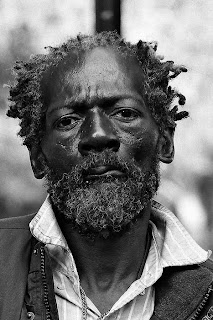 Sometimes the less said about a photograph, the better. Such is the case with this image I call "Homer" and I will leave you to draw your own conclusions. I will, however, give you the back story on how I came to capture this image.
I was in New York City a couple years ago and went to Washington Square Park for a day of recreational photography. While I was photographing the fountain at the center of the park, a homeless gentleman approached me and said, "Hey man, it's my birthday...take my picture". Not really knowing what to do and not wanting any trouble, I turned towards him and fired off a quick shot. As I started to turn back towards the fountain, he thanked me, saying he didn't know if he would live to see his next birthday. Well, I was overcome. I do not carry cash on the streets of New York but had stashed five dollars in my pocket in case I wanted a cup of coffee or the like while I was out. I dug into my pocket, handed him the five dollars and told him that was all the cash I had. He thanked me and walked away. I didn't get a chance to hear his story or even get his name. I resumed photographing the park and didn't give the matter any more thought.
Once I returned home, I started sorting through the hundreds of images I had taken during that week in New York and came across this photo and it stopped me dead in my tracks. I just stared at the computer screen with his image on it for what must have been a half an hour. I had to give him a name...but what? Since he was homeless on his birthday, I decided on Homer.
I have been back to New York several times since my chance encounter and have gone to that park in the hopes of seeing him. If nothing else to make sure he is alright, to tell him what an impact his photograph has had on me and others who have seen it and to hopefully learn his name and his story. So far, I have not seen him there. I will be back in New York in October and will once again go to Washington Square Park to look for Homer.
Posted by Unknown at 5:57 PM